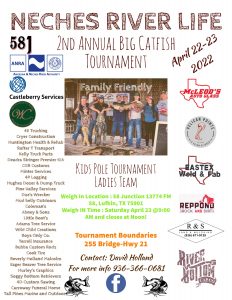 ***We will poly graph 1st, 2nd and a 3rd of our choice if deemed necessary.*** Payout: 1st-10th place  1st TBD 2nd TBD 3rd  TBD 4th  TBD 5th  TBD 6th-10th TBD   Kids fishing pole tourney 1-10th One Fish Weigh In for kids. Kids 15yrs and younger. All State and Federal rules will be observed. Contestants must have a valid fishing license on their persons. Fishing and boating licenses are the responsibility of team members.   Fishing tournament boundaries are from Hwy 21 in Alto and southern boundary is TBD but more than likely will be the same as the first Big Catfish Tourney.   Registration fee is 100.00 per team. One, two, or three person teams with at least one person 18 of age. One (1) boat per team.   This is a “1” Fish weigh in for Big Fish per team!   Only Catfish will be allowed to be weighed in. Catfish species limited to Blue Cat, Channel Cat, or Flathead Cat. No other species of fish are allowed to be weighed in.   Only one catfish (18” for op) may be weighed in per team. Only bring 1 fish to be officially weighed in for the tournament to the weigh in table, do not bring any more fish than allowed to be weighed in. There will be several different closest to lb fish and other weigh on options with trash fish etc. more info to come.   Dead fish penalty will be determined later.   Fish can be caught by rod and reel, limb line, pole line, trot line more less any legal means of catching fish according to state and federal laws. No nets, telephoning, or dynamite : ).    Fishing within 5yds (up or downstream) of a competitor’s boat or bank fisherman, same side of the River, which was first anchored, is prohibited. We had a few people that were putting their poles right next to someone else’s in our last tournament let’s respect ea other and give at least 15ft! ***No prestaging of lines with no hook in water rules will be posted later.***   Any legal bait is allowed.   Good sportsmanship, courtesy, safety, and conservation are expected of all individuals and disorderly conduct will be reason for disqualification if circumstances require. Decision of Tournament Director will be final.   In case of a tie first one to weigh in takes place. All decisions of the Tournament Director and Committee are final. All protests must be brought to the attention of the Tournament Director prior to the conclusion of the tournament weigh-in.   Tournament locations are subject to change due to other tournament conflicts/river or ramp conditions/weather conditions/etc. Notifications will be well in advance, and all updates can be found on the Neches River Life 2nd Annual “Big Catfish” Tournament Facebook page.   If caught cheating, you will be terminated indefinitely from all NRBC Tournaments! Any disqualification results in forfeiture of all winnings.   CONTACTS: Tournament Director: David Holland 936-366-0681 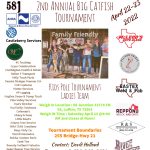